Can any evidence be found in the museums of the world for the historical existence of Moses? Just who was the Egyptian princess who claimed him as her own son? And who was the Pharaoh of the Exodus, and who was his first born son that died in the 10th plague?

First let's look at what we know about Moses from scripture.

Deu 34:7 And Moses was an hundred and twenty years old when he died: his eye was not dim, nor his natural force abated.

After the exodus, Moses and Israel wandered in the wilderness 40 years:

Num 32:13 And the LORD'S anger was kindled against Israel, and he made them wander in the wilderness forty years, until all the generation, that had done evil in the sight of the LORD, was consumed.

So Moses was 80 at the time of the first Passover and exodus from Egypt.

1 Ki 6:1 And it came to pass in the four hundred and eightieth year after the children of Israel were come out of the land of Egypt, in the fourth year of Solomon's reign over Israel, in the month Zif, which is the second month, that he began to build the house of the LORD.

Acts 7:29 Then fled Moses at this saying, and was a stranger in the land of Madian, where he begat two sons.
Acts 7:30 And when forty years were expired, there appeared to him in the wilderness of mount Sina an angel of the Lord in a flame of fire in a bush.

Acts 7:23 And when he was full forty years old, it came into his heart to visit his brethren the children of Israel.
Acts 7:24 And seeing one of them suffer wrong, he defended him, and avenged him that was oppressed, and smote the Egyptian:

So Moses was born about 1525 B.C., and the daughter of the reigning Pharaoh (Tutmoses I) who found him in the Nile was princess Nefure, who later became known as Queen Hatshepsut, Pharaoh of Egypt.

In 1488, six years prior to her death, all official records of Hatshepsut ceased.

After Moses leaves for Midian he is replaced by the half brother of Hatshepsut, whom she marries. The half brother takes over the title of Tutmoses II, which used to be Moses' title.
Tutmoses III

Assumed the position of Pharoah with the demise of Hatshepsut. (Moses was his competitor for the position of pharaoh). Tutmoses III was "The Napoleon of ancient Egypt and captured over 350 cities. Moses in Midian Hatshepsut's royal wall paintings in her mortuary temple at Deir el Bahri were defaced, and her statues were destroyed, because of the hatred Tutmoses III had for her and Moses. Images of Senmut (Moses) also defaced by Tutmoses III, the childhood rival of Moses. Amenemhab mentions the month and the day of Tutmoses III death: "The last day of the third month of the second season ... He mounted to heaven, he joined the sun: the divine limbs mingled with him who begat him." According to James Henry Breasted, founder of American Egyptology, this translates to the 17th of March, 1450 BC. Exodus 2:23 states: "During that long period, the king of Egypt died...".
Tutmoses IV

Pharaoh of the Exodus

Pharaoh of the Exodus. He was not a first born son, or else he would have died in the tenth plague too.

He was the second born son of Amenhotep II. The Dream Stela of Thutmose IV, found between the front paws of the Sphinx, indicates he was not the firstborn legal heir to the throne, that he killed his firstborn brother to take the crown. The stele was used to legitimize the murder by claiming it was directed by the Sphinx in a dream.

Destruction of Jericho at about 1407 BC. According to "New Bible Evidence" by Sir Charles Marston, the  scarab and pottery found in Jericho indicate it was destroyed at the time of Amenhotep III. 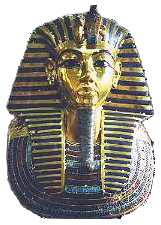 In an inscription on a statue of a lion dedicated by Tutankhamen to the temple of Soleb, he calls Amenhotep III his father.

Supposedly reigned from an age of only 9 until his death at about 18. Dies "mysteriously". Actually was only the heir apparent to the throne (Crowned Prince) that may have co-reigned with his father in his later years.

Tomb found in the Valley of the Kings by Howard Carter in 1922, said to be a "cursed" tomb. His burial looks rushed, and in a tomb generally too small - not designed for a reigning pharaoh's burial.

Akhenaten Akhenaten abruptly abandons the worship of the previous gods of Egypt.

Amenhotep IV changed his name to Akhenaten, symbolizing the change from Amun worship to monotheistic Aten (Sun) worship. (Moses showed the former gods of Egypt to be powerless, hence the change to monotheism)

Shifted his capital from Luxor to a new capital Akhetaten.

His wife was the famous Nefertiti which means 'maiden of joy'.

In a song written by Akhenaten to his god, there are seventeen verses which correspond with Psalm 104.

Statues of the infant Moses (Senmut)
and Princess Nefure (Hatshepsut)

Egyptologists claim the infant in these statues is princess NEFERU-RA and the adult is Senmut, her vizir, but when she claimed Moses as her son, he became the child heir-apparent to the throne of Egypt. The child wears the serpent on the forehead and lock of hair on the right side of the head that designates a prince of Egypt! It is Moses!

As Moses grew to adulthood in Egypt, he assumed the title of Tutmoses II as heir to the throne of Egypt, but when he left Egypt after committing murder, he was replaced, and another man assumed that title. But statues of Moses as an adult apparently do still exist! On the left below is Moses as a child, and on the right is Moses as an adult, as Thutmoses II, prince of Egypt, before he left Egypt for Midian!

The above information was compiled from many different sources, and this page will likely change to reflect corrections and any new information I come across.