While visiting a friend in Switzerland, I heard of what seemed to me, one of the greatest discoveries since the time of Christ—that Peter was buried in Jerusalem and not in Rome. The source of this rumor, written in Italian, was not clear; it left considerable room for doubt or rather wonder. Rome was the place where I could investigate the matter, and if such proved encouraging, a trip to Jerusalem might be necessary in order to gather valuable first hand information on the subject. I therefore went to Rome. After talking to many priests and investigating various sources of information, I finally was greatly rewarded by learning where I could buy the only known book on the subject, which was also written in Italian. It is called, "Gli Scavi del Dominus Flevit", printed in 1958 at the Tipografia del PP. Francescani, in Jerusalem. It was written by P. B. Bagatti and J. T. Milik, both Roman Catholic priests. The story of the discovery was there, but it seemed to be purposely hidden for much was lacking. I consequently determined to go to Jerusalem to see for myself, if possible, that which appeared to be almost unbelievable, especially since it came from priests, who naturally because of the existing tradition that Peter was buried in Rome, would be the last ones to welcome such a discovery or to bring it to the attention of the world.
In Jerusalem I spoke to many Franciscan priests who all read, finally, though reluctantly, that the bones of Simon Bar Jona (St. Peter) were found in Jerusalem, on the Franciscan monastery site called, "Dominus Flevit" (where Jesus was supposed to have wept over [pg. 4] Jerusalem), on the Mount of Olives. The pictures show the story. The first show an excavation where the names of Christian Biblical characters were found on the ossuaries (bone boxes). The names of Mary and Martha were found on one box and right next to it was one with the name of Lazarus, their brother. Other names of early Christians were found on other boxes. Of greatest interest, however, was that which was found within twelve feet from the place where the remains of Mary, Martha and Lazarus were found—the remains of St. Peter. They were found in an ossuary, on the outside of which was clearly and beautifully written in Aramaic, "Simon Bar Jona".

I talked to a Yale professor, who is an archaeologist, and was director of the American School of Oriental Research in Jerusalem. He told me that it would be very improbable that a name with three words, and one so complete, could refer to any other than St. Peter.

I quote this letter of Dr. Glueck because it shows that priest Milik is a competent archaeologist. As I have mentioned, I was only able to be with him for a few minutes and was not able to show him but a very small part of the evidence. Anyone, including myself, would readily agree with Dr. Glueck that if only the name Simon Bar Jona on the ossuary was all the evidence that was available it would not be conclusive evidence that it was of the Apostle Peter, though it would certainly be a strong indication.
The story of the cave and the ossuaries and the regular cemetery just outside of the Convent site is this: It was a Roman custom that when a person had died and after about ten years when the body had decomposed, the grave would be opened. The bones would be placed in a small ossuary with the name of the person carefully written on the outside front. These ossuaries would then be placed in a cave as in the case of this Christian burial ground and thus making room for others. But this cave or burial place where the ossuaries were found and which was created and brought about through the natural and disinterested sequence of events, without any reason to change facts or circumstances, was a greater testimony than if there were a witness recorded, stating that Peter was buried there. And yet, even that is unmistakenly recorded in the three words in Aramaic of the ossuary, Simon Bar Jona.
Herein, lies the greatest proof that Peter never was a Pope, and never was in Rome, for if he had been, it would have certainly been proclaimed in the New Testament. History, likewise, would not have been silent on the subject, as they were not silent in the case of the Apostle Paul. Even the Catholic history would have claimed the above as a fact and not as fickle tradition. To omit Peter as being Pope and in [pg. 8] 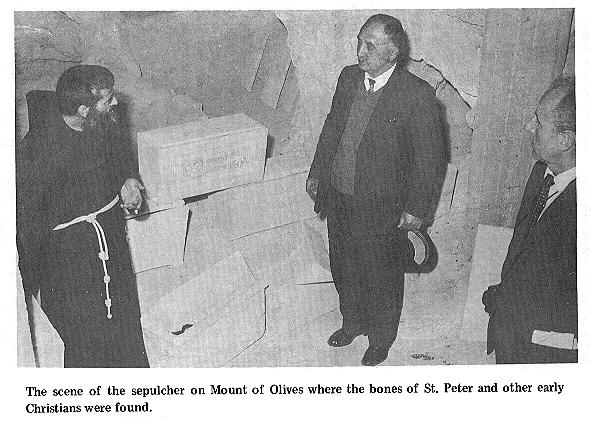 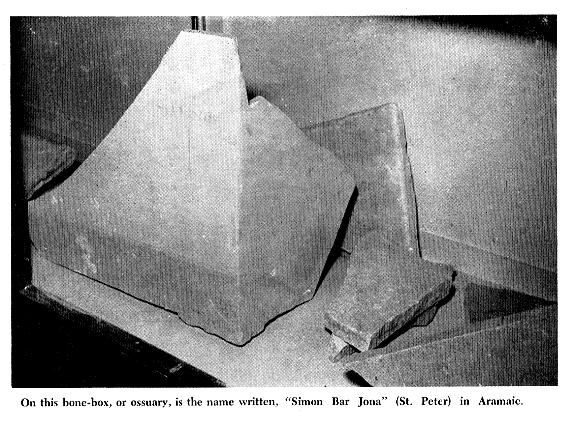 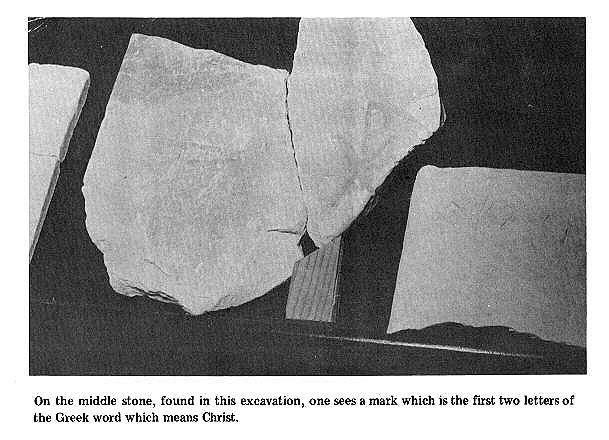 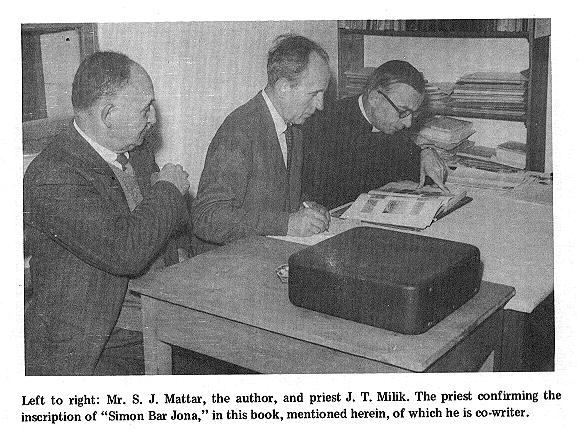 Copyright 1960 by F. PAUL PETERSON (4th Edition, 1971).  Copies may be obtained from your local bookstore or from the author and publisher, F. Paul Peterson, P.0. Box 7351, Fort Wayne, Indiana, Price $2.00.  Permission is granted to reproduce any part of this book if title, price and address where it may be purchased are given.

Has St. Peter returned to Jerusalem? This article contends that the inscription has been misinterpreted.

A Typical Tomb Near Dominus Flevit at Holy Land Photos.

The Discovery of the Tombs of Mary, Martha, and Lazarus by Grant Jeffrey

The Bones of St. Peter (in Rome)? at University College Dublin, Ireland.

According to the venerable Bede's (673-735 A.D.) Ecclesiastical History of the English Nation, Book III, chapter XXIX, the bones (relics) of Peter and Paul were shipped by Vitalian, bishop of Rome, to Oswy, king of the Saxons in 665 A.D.  The librarian at Canterbury Cathedral has aparently confirmed that church inventories do record the arrival of the remains of Peter and Paul into the church's safekeeping, shortly after Pope Vitalian sent them to Britain. Unfortunately though, the remains were apparently lost, or record of their location was lost, probably in the aftermath of the Cromwellian Rebellion of the mid 17th century. (see this page).